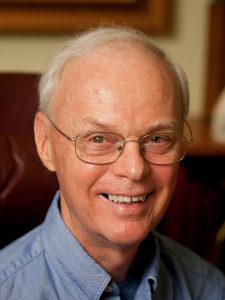 Dwight graduated from the U.S. Naval Academy in 1967 with a major in History and Government. He served twenty years as a Navy surface warfare officer on most of the world’s oceans in ships ranging from destroyer to aircraft carrier and with river forces in Vietnam (Bronze Star for Meritorious Service, Purple Heart).

Lieutenant Commander Hughes taught Naval ROTC at the University of Rochester, earning an MA in Political Science. He later earned an MS in Information Systems Management from USC. In his final sea tour, Commander Hughes planned and conducted convoy exercises with over twenty ships of the Maritime Prepositioned Force, Diego Garcia, Indian Ocean.

Dwight’s second career was software engineering, primarily in geographic feature naming data and electronic mapping under contract for the U.S. Geological Survey. A ridge in Antarctica is named after him in recognition of contributions to Antarctic databases and information services.

Dwight’s current calling melds a love of the sea and ships with a lifetime study of naval history. His commitment is to advance the understanding of our Civil War naval heritage and to communicate that heritage in an educational and entertaining manner especially for new generations.

Dwight is author of A Confederate Biography: The Cruise of the CSS Shenandoah (Naval Institute Press, 2015) and a contributing author at the Emerging Civil War blog. His new book for the Emerging Civil War series, Unlike Anything That Ever Floated: The Monitor and Virginia and the Battle Hampton Roads, March 8-9, 1862 (Savas Beatie) was published in March 2021. He has presented at numerous Civil War Roundtables, historical conferences, and other venues.

See current schedule of speaking engagements and a list of past events.

Request a presentation for your organization.